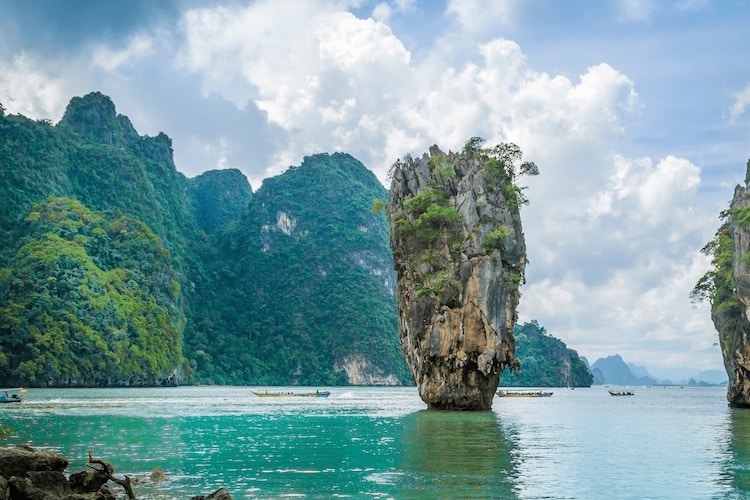 There are destinations around the world that are somewhat synonymous with magic mushroom experiences (think Amsterdam). As those destinations go, Thailand must be near the top of the list. Amsterdam headshops may have their truffles, but travelers to southeast Asia often consume their first ‘shrooms in notoriously potent smoothies or on magic pizzas. The restaurants that offer these delights are operating in technical illegality. However, this status is widely ignored, as the Thai government greatly relies on its tourist industry. For those interested in this long-time scene, in 2022 the Thai government announced that its laws on the sale and consumption of psychedelic mushrooms will be relaxed going forward.

But why go to Thailand? Who cares for delicious food, sunny white sand beaches, spectacular natural beauty, and world famous parties? All of the mushrooms of Thailand are being cultivated around the world, and with a little persistence, you’ll probably find them available near you (once again, we do not, and are not, condoning the consumption of magic mushrooms).

Most of the different types of Thai magic mushrooms grown today were found or bred by legendary mycologist John Allen, who explored the region in the ’90s. Here are some of his greatest hits:

Like their cousins, the Thai Cubensis magic mushroom, Pink Buffalo cubensis was found on the lush, tropical Thai island of Koh Samui, and the first specimens were found in a field reputed to be inhabited by the Sacred Pink Buffalo.

The body of the mushroom is larger than average. The caps take on hints of red and brown.

The potency of Pink Buffalo magic mushroom is considered average, with effects similar to those of other Southeast Asian species like rapid onset, striking visuals, and less body load.

Hanoi cubensis were first collected growing in a pile of dung and straw in North Vietnam – we get that’s not Thailand, but we decided to include it as it’s in the neighbourhood. Despite growing naturally in the country, magic mushroom possession can be punishable by death in Vietnam.

Typically, Hanoi mushrooms are medium-sized, yellow to golden brown in colour, and the stem is pale, slender and curved. It’s a beginner-friendly species known for its ease of cultivation, prolific sporulation, and ability to be cultivated on various substrates.

Hanoi effects have been reported as average potency, possibly resulting in synesthesia and euphoria.

Ban Hua Thanon cubensis were discovered by off the coast of Vietnam on Ban Hua Thanon Island, where it grows in rice paddies, fruiting from early July to late August.

These magic mushrooms fruit in small but dense patches, caps are rounded and yellowish in colour, while stems are slender and round. This species is a heavy spore depositor and colonizes at moderate speed. Ban Hua Thanon is considered easy to cultivate due to its resistance to high temperatures.

Ban Hua Effects are said to be similar to other Thai species, fast acting but mild effects with vivid visuals and deep inner awareness, and a lighter body load than other cubensis strains.

Elephant‘s name comes from being discovered growing on elephant dung in southern Thailand and because of their large fruiting bodies.

The broad cap is often light brown in the early stages of its life cycle, growing darker in maturity and with thick white stems and moderate sporulation.

Elephant’s are said to be like other species from southeast Asia. Reports suggest fast-acting mental high, euphoria, and visuals, but fewer bodily effects.

Ban Thurian cubensis produce small fruiting bodies, have yellowish caps, and stems that are slender and often curved. They are known to be heavy spore depositors and very vigorous colonizers.

Reported effects of the Ban Thurian include fast acting, vivid visuals, deep inner awareness, and a lighter body load than other cubensis strains.

Nua Muang cubensis is another strain discovered growing on water buffalo dung on the island of Koh Samui, Thailand.

These cubensis possess physical similarities to other southeast Asian strains. An aggressive colonizer and prolific fruiter, this strain produces large patches of mushrooms that range from golden to light brown in colouration with thick stems.

Nua Muang effects are similar to other southeast Asian strains, with visual stimulation, more mental effects, and less of a body load.

Koh Samui or psilocybe samuiensis were also found on the island of Koh Samui (trust us, it’s a great place).

Koh Samui’s effects are similar to other Southeast Asain species, but with the potency regarded as above average.

The Allen Strain is a robust colonizer named after the man himself. It’s similar to many of the strains originating from Southeast Asia.

Allen is reported to be average in potency with effects including light bodily vibrations, creative inspiration, and mild visuals.

Always be careful when sourcing psilocybin mushrooms and only take them in the proper set and setting. Keep in mind that the effects reported regarding individual mushroom species will vary between individuals, and it is very difficult to predict what someone’s psychedelic trip will be like.