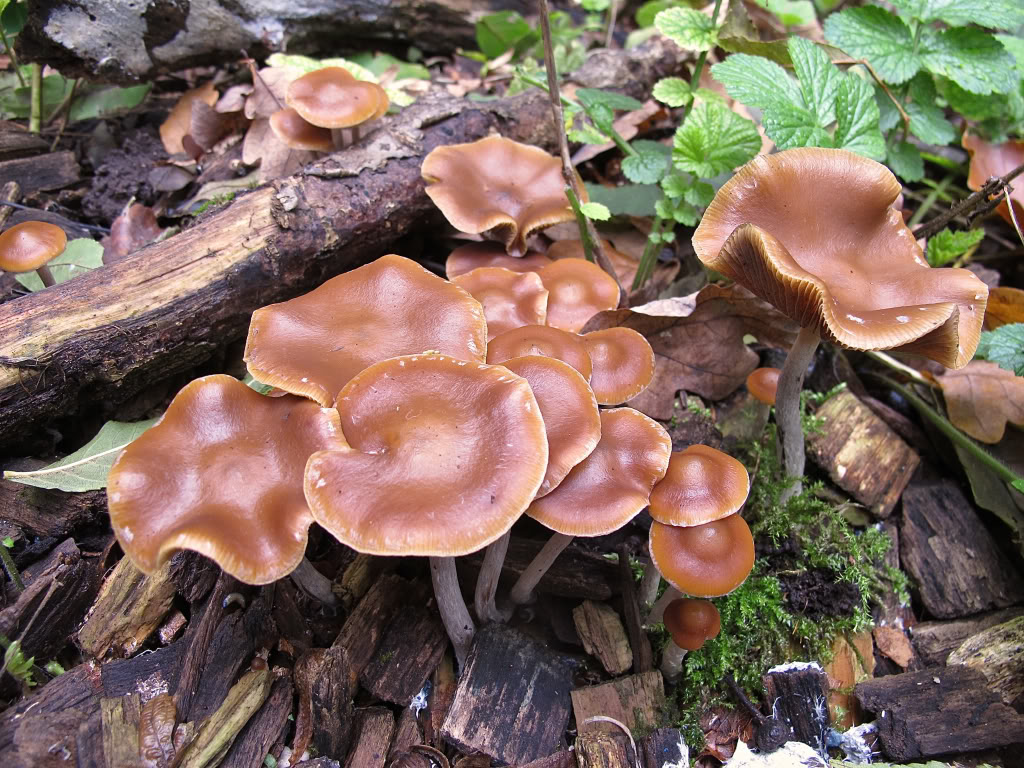 Psilocybe cyanescens, more commonly known as “wavy caps” are a species of psilocybin-containing mushroom that is common worldwide, and very potent, especially compared to the more common Psilocybe cubensis. However, cultivation of this species is much more complex than cultivating Psilocybe cubensis, making it a mushroom that is usually found through foraging in the wild. Continue reading to learn more about Psilocybe cyanescens, wavy in more ways than one.

Psilocybe cyanescens grows primarily on wood chips, especially in and along the perimeter of mulched plant beds in urban areas. This has spurred the idea of this species symbiotic relationship with urbanization, as they are now commonly found on piles of ligneous debris or in mulched garden beds, sometimes in enormous quantities exceeding 100,000 mushrooms. Though their native habitat is speculated to be the coniferous woodlands of the north-western United States, Elise Wakefield, English mycologist and plant pathologist began collecting species as early as 1910 in London and published the first formal description in 1946 in the journal Transactions of the British Mycological Society. Today these mushrooms have spread to every habitable continent.

As their colloquial name suggests, Psilocybe cyanescens possess a cap that becomes noticeably wavy upon maturity, is caramel to chestnut-brown when moist, and pale buff or slightly yellowish when dried. Stems are pale and thick, with these mushrooms looking similar to Psilocybe cubensis overall. Psilocybe cyanescens spores are dark purple-brown in colour.

Psilocybe cyanescens is known as a “LBM,” or little brown mushroom. This is a large group of mostly-unrelated species that are very difficult to tell apart without careful identification and includes most psychoactive species, a number of interesting culinary species, and a few toxic (deadly) species. The closest look-alikes to wavy-caps are other Psilocybe species. Most do not appear in the same habitat or have distinct wavy edges on the cap. However, young species all look very similar. While psilocybin mushrooms are considered one of the safest “recreational” drugs, it is important to know which is which because potency can vary dramatically. Other psychoactive species, such as Panaeolus, are also fairly similar physically.

Several species of non-psychoactive, edible mushrooms, like Armillaria mellea and Enokitake (Flammulina velutipes) are classified in the LBM group as well, though these have white spore prints making them easy to differentiate. The worst mistake would be to misidentify a Deadly Galerina (Galerina marginata). Those who consume this species usually die, though prompt medical attention does save some. Deadly Galerina is the same color as Psilocybe cyanescens and the base of the stem is black (not blue), which may lead some to assume it contains psilocybin. Habitat is also overlapping, and both species can grow together, appearing to be from the same flush.

Jeffery Lebowe is the director and a mycologist at Spores Lab, a Canadian team of mycology experts with over 10 years of experience who provide not only magic mushroom grow kits, but also guidance in the process. We got to ask Jeff about the differences between cultivating the two species:

Psilocybe cyanescens is a relatively common psilocybin-containing mushroom that can be found growing naturally on almost every continent, however is rarely cultivated indoors. Cubensis on the other hand is almost exclusively cultivated indoors, and are by far the most common mushrooms available for sale online. That said, we have seen some websites offering wild foraged Psilocybe cyanescens. [Also] Psilocybe cyanescens is distinctly more mycorrhizal, meaning it requires ligneous material (wood) in its environment in order to fruit, but cyanescens mycelium can be colonized on the same medium as cubensis (although it will benefit from the addition of hardwood sawdust) and in the same conditions as cubensis.

While colonization mediums and conditions are relatively similar for both of these species, the fruiting process is quite different. Cubensis enjoy a substrate composed of coconut coir/vermiculite/additives, high humidity, and temperatures between 72-75F, while cyanescens need drastically different conditions. To fruit Psilocybe cyanescens you will need to mix your spawn with wet straw/cardboard (sterilized of course), and make a thin 1″ layer on the bottom of your fruiting container, then when this layer is colonized cover it with hardwood chips, then wait for the hardwood chips to colonize. Once the chips are colonized, you will need to drop the temperature to under 10 degrees celsius to initiate fruiting, and it may take up to 2 weeks in these conditions for pins to form!

All of that said, it is quite rare to cultivate cyanescens, and the most likely way that you are going to come across them is actually finding them yourself while out in nature! Keep your eyes peeled around any mulched beds or areas with wood chips for the glistening caps. Often in nature when Psilocybe cyanescens fruit, they flush several hundred to several thousand mushrooms!

If you plan on foraging for Psilocybe cyanescens, proceed with extreme caution before consuming any wild mushroom, and ideally have your sample looked over by a mycologist. It is vitally important to positively identify every single specimen if gathering for consumption. And if you plan on using psilocybin mushrooms for mental wellness, it’s advised that you connect with a psychedelic integration therapist beforehand to plan your experience. You can find one from our listing on Frshminds.