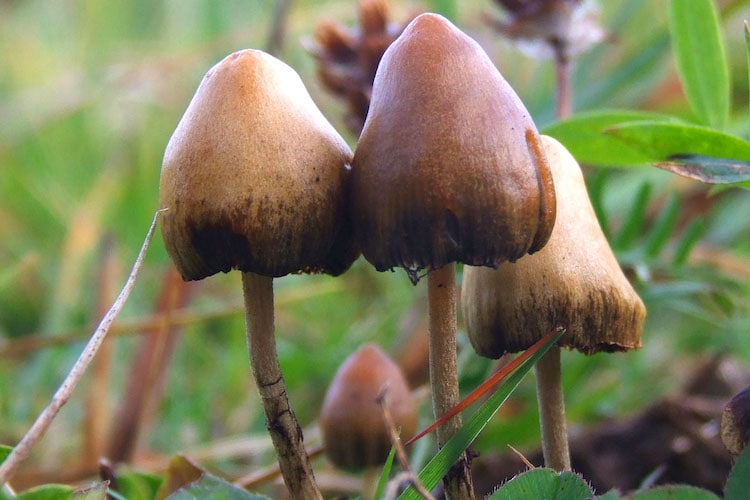 Here is a quick video introduction to the Liberty Cap mushroom:

Then in 1871 a German mushroom maven by the name of Paul Kummer switched the Liberty Cap’s genus name to psilocybe. After his tinkering, Jacob Emanuel Lange changed the Liberty Cap mushroom to today’s scientific name, psilocybe semilanceata, in 1936.

The etymology of the Liberty Cap mushroom derives from its physical features. Psilocybe means “smooth head” and semilanceata nods to being “half-spear shaped.”

Besides colloquially referred to as Liberty Caps, they are also called Phrygian Caps. What does a psychedelic mushroom have to do with freedom and a hat? More on that later, so keep reading.

While this may not sound like a lot, these percentages help rank Liberty Cap mushrooms as one of the most potent among the psilocybe genus. Even though the psilocybin percentages reported here do not represent a wide enough sampling to provide conclusive data, they still qualify psilocybe semilanceata as the third strongest mushroom in its genus. Only psilocybe azurenscens and psilocybe bohemica contain higher percentages of psilocybin. Even then, the Liberty Cap mushroom boasts the highest level of baeocystin at 0.36%.  Our article “Understanding and Measuring Magic Mushroom Potency” cover the topic of potency in more depth

This is all to say that consuming psilocybe semilanceata will no doubt ring your Liberty Bell quite hard, and hopefully not so powerfully that you are left with a permanent crack. However, it is a welcoming trend to see a crack in the war on consciousness, and the ability to regain sovereignty over our consciousness.

Do not worry, consuming Liberty Caps will not be anything like the movie Altered States. Much like cannabis was demonized with infamous propaganda like Reefer Madness, mushrooms and psychedelics have also been marginalized. Psilocybin qualifies as a classic psychedelic, in the same company as LSD and mescaline. While on rare occasions, people have experienced tragedy under the influence of mushrooms, psilocybin remains one of the safest psychoactive compounds to use, especially in the correct set and setting.

Set and setting refer to one’s mindset going into a psychedelic journey, and the setting refers to the location, place or environment the psychedelic journey takes place. Do make sure that both of these elements are in good form prior to the journey. For example, do not consume Liberty Cap mushrooms if a job has just been lost, a relative has died, or a romantic breakup has just occurred for example. Also, do not take psilocybin at Sunday mass, a best friend’s wedding or a PTA meeting.

A good set is free of anxiety, stress, trauma, or any other life imbalance or chaos. Setting has a bit more leeway and flexibility, however doing Liberty Caps out in nature where you found them is always the safest bet. When these things are in place, here is what you can expect to happen after ingesting psilocybin:

Feeling of unity with people, plants, animals and everything around

A sense of connection to surrounding people and objects, while being disengaged (Off in your own little world, while everyone is with you psychically)

Dissolution of time and space

To put it simply, when your psychedelic journey scenario aligns correctly, one can discover an ancient system to achieve cosmic bliss. Afterwards, do not be alarmed if entirely new and fresh perspectives of the world and reality manifest. Lifting the veil on the Matrix is never a comfortable endeavor.

Dosing always varies on a person to person basis. Body size and composition plays a role. How much time that has passed since the last meal also influences psilocybin uptake. It is generally advised to eat psychedelic mushrooms on an empty stomach if possible. Allow 3 to 4 hours at least since eating your last meal to ingest Liberty Cap mushrooms.

Mushroom dosing depends on a host of factors, like the particular species, their state of preservation (fresh or dried), etc. This makes psychedelic mushroom dosing an imprecise science at best. However, generally speaking, dosing Liberty Cap mushrooms goes as follows:

Liberty Cap Mushroom on the Clock

The onset of psilocybin varies from individual to individual as well. Oral ingestion of psilocybin lags behind other consumption modalities, like inhalation for example. Broadly speaking, most people will feel psilocybin begin to work after about half an hour. Potent ones can sometimes only take 15 minutes to kick in.
The psilocybin upswing begins at the 1 hour to 90 minute mark and the peak can be expected to last around 2 hours, before beginning to dial down. The entire experience will have a duration of 4 to 6 hours, depending on dosage strength. Think about it like a rollercoaster ride.

There will be a slow, anxious time cranking up to the first, big drop. There will be lots of wild, ups, downs, turns, curves, and more drops, before flattening out, and cruising smoothly into a full stop.

Physical effects of Liberty Cap mushrooms are minimal. These include pupil dilation, and slightly elevated heart rate and blood pressure, particularly at higher dosages. Nausea is common although not to be expected, as mushrooms love to beat on stomachs. An uncomfortable stomach may occur, but do not expect vomiting or diarrhea, as this is not as frequent. On rare occasions, dizziness, tremors and muscle discomfort may occur. Overall, the physical effects are mild and not a big deal.

Liberty Caps love 3 things: grass, moisture, and natural fertilizer. Due to the prevalence of this trio of environmental settings, the Liberty Cap mushroom is the world’s most prolific psychedelic mushroom. They can be found in parklands, backyards, pastures, fields, forests, and just about anywhere these 3 factors converge.

Psilocybe semilanceata magic mushrooms are a saprobic fungus, so it gets off on rotting and decomposing grass roots. The only other thing that it might enjoy more is getting wet. Liberty Caps thrive in damp, wet and moisture ridden environments. The last secret ingredient is adding nature’s Miracle Gro- dung. Liberty Caps do not grow directly on dung, yet relish fields and areas fertilized with animal waste: cow, sheep, horse, etc. The mushroom delights in acidic, rich soil. Not only does shit grow flowers, it grows beautiful, healing, psychedelic mushrooms too.

Liberty Cap Mushrooms Are Your Passport to the World

Thanks to the ease of finding its most desired habitat, Psilocybe Semilanceata/Liberty Cap mushrooms are readily available in your nearest wet, grass patch around the world. Psilocybe semilanceata favors the northern hemisphere. The mushroom is native to Europe and can be located throughout the European Union, from Hungary to Spain to Britain and Ireland.

The Liberty Cap also enjoys wide distribution through North America. The mushroom calls Canadian provinces home from New Brunswick to British Columbia. The mushroom’s prevalence does not stop there. The Liberty Cap reaches far and wide across the United States, particularly in the Pacific Northwest, on the western side of the Cascade Mountains.

If you are imagining what the favorite mushroom of your garden gnome is, then you are visualizing a Liberty Cap. Liberty Caps are delicate, pale brownish to beige, with distinct striations on the cap, that is topped with a noticeable nipple. The cap stands atop a wavy and thin, half-cooked spaghetti strand of a stem. Psilocybe semilanceata changes color depending upon the amount of moisture in its environment. It also sports a slimy film on the cap that can be peeled back, when still moist.

Liberty Cap mushrooms are one of the most often misidentified mushrooms in the field, pun intended. Some of the Liberty Cap’s imposters include panaeolus semiovatus, the lovely named, Dung Roundhead and panaeolina foenisecii, also known as the Brown Mottlegill or Mower’s Mushroom.

Unfortunately the list of fakers does not end there. Other Liberty Cap mimics are: psilocybe fimetaria, psilocybe liniformans, conocybe apala, psilocybe strictipes, and pholiotina rugosa.

To Cap It All Off

The Liberty Cap’s etymological history stretches all the way back to Roman times and the assassination of Caesar. The naming of the Liberty Cap mushroom follows a long and winding road starting with the caps freedmen in ancient Rome wore. They were forced to wear the hat as both a symbol of pride and shame.

Fast forward a slew of centuries, and the next cap that became associated with liberty was the Phyrgian cap, or the iconic red hat with the pointy tip, that French revolutionaries wore. The trendy cap spread to the United States during the American Revolutionary War. The cap would be hoisted atop a pole in town squares symbolizing liberty.

From there, it took the work of a few poets and writers, to begin associating the imagery of the cap and pole with psilocybe semilanceata and that would complete the long, strange trip of how the Liberty Cap got its name.

While I am originally from Chicago, I call Austin, TX home (which coincidentally led me to my first Ayahuasca retreat) with stops along the way in places like the everglade state of Florida and Spain. An active participant in the psychedelic community, I've had the privilege and opportunity to hear a range of expert speakers speakers, including Anthony Bossis, Jamie Wheal, Dennis McKenna and Roland Griffiths. In my spare time I hike national parks, enjoy abusing my passport, listen to the Flaming Lips and read Joseph Campbell, Jung, Graham Hancock, Alan Watts and Montaigne. As my beloved Bill Hicks said, “It’s just a ride."