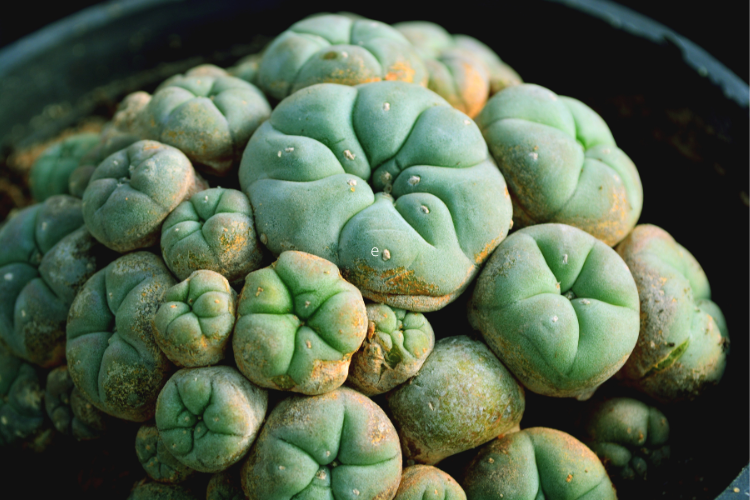 San Pedro and peyote cacti are some of the most established psychedelics still in use today. These cacti contain mescaline, which, unlike synthetics like LSD or MDMA, is part of ancient traditions. Yet, these plant medicines are less popular at psychedelic retreats and in research. In this article, we decode the difference between San Pedro vs peyote.

Read on for effects, mescaline content, related species and even cultivation differences.

What is San Pedro Cactus?

San Pedro cactus, also known as “Huachuma,” is a mescaline-containing cactus native to South America. This cactus grows in the Andes mountains as a tall column with beautiful large white flowers.

The cactus has been in use for thousands of years, and San Pedro is still legal in the Andean regions of South America. Shamans have long used San Pedro’s psychedelic effects for treating physical and mental health conditions and as a connection to the spirit world.

When the Spanish arrived in South America, they tried to curb the use of Huachuma. When the use continued, colonialists renamed it to connect it to the religion they were trying to convert indigenous to.

The name “San Pedro” was pushed in connection to Saint Peter, who “holds the keys to heaven.” The title San Pedro stuck, and now it is common to call Huachuma “San Pedro.”

Peyote, or Lophophora williamsii, is another mescaline-containing cactus native to Mexico and the Southwestern United States. The small round cactus often called “buttons,” grow in clusters on the ground with pink flowers.

Peyote also has thousands of years of history behind it. Native American cultures, like Navajo and Huichol, have used peyote for generations as a right of passage and healing tool.

Like San Pedro, colonial powers demonized the use of peyote in North America. Use went underground, but after extensive legal battles, the American Indian Religious Freedom Act (AIRFA) Amendments protected religious use. The legal battle has been covered in the Netflix series “How to Change Your Mind,” one of many documentaries about plant medicine.

Now, organizations like the Native American Church hold legal peyote ceremonies. The cactus has helped with healing people from addiction, depression, and from the trauma of colonization.

It is illegal to harvest and consume peyote outside of the groups who have permission. Peyote’s habitat is in danger of disappearing. Because peyote can take decades to mature and exists in a very small region, the protections hope to preserve a tradition dating back thousands of years.

What is Peruvian Torch?

There is another mescaline-containing cactus called Peruvian Torch or Trichocereus peruvianus. As the name suggests, the cactus is native to Peru. It is a tall columnar cactus, like San Pedro and grows in the same Andean region.

The cactus contains much less mescaline than its cousins San Pedro and peyote. In fact, some studies have reported no mescaline content from certain wild and cultivated varieties on Peruvian torch.

All mescaline-containing cacti will have variable concentrations of alkaloids. For this reason, breeding and selecting different cacti have become a niche hobby.

While both Huachuma and Peyote contain mescaline, there are differences between a San Pedro vs peyote trip.

Each plant is said to have its own spirit, although both are associated with “grandfather” energy.

Both have unique sets and settings. For example, peyote is often taken overnight, while San Pedro is during the day. Huachuma ceremonies vs peyote ceremonies have different formats, songs, and mythology.

Each cactus also has its own individual alkaloid content, likely creating unique effects.

San Pedro has a reputation for being a long trip, lasting 8-12 hours. Depending on the dosage and cactus, some high-dose trips have lasted for days! San Pedro is viewed as a heart medicine and grounding force often likened to that of a grandfather.

While every trip is different, specific effects of San Pedro can include euphoria, connection to nature, and personal insights. While visuals can occur, they are typically less overwhelming than plant medicines like ayahuasca.

Challenging aspects might include nausea, sweating, chills, vomiting, strange physical sensations, and confusion. In a traditional view, these effects are cleansing.

Peyote lasts about 8-12 hours. The cactus is usually consumed in the context of a communal ceremony. The Huichol of Mexico and the Native American Church have different rituals associated with their ceremonies.

Part of peyote culture is also peyote songs, sung throughout the night by the shaman or “roadman” leading the ceremony, along with others in the circle.

Peyote’s effects are comparable to San Pedro in a broad sense – euphoria, a sense of interconnectedness, visions and insights. Other purgative effects like nausea, somatic sensations, sweats, chills, and racing thoughts are also present. In the peyote tradition, vomiting is often referred to as “getting well.”

Peyote is also referred to as having a grandfather spirit. While peyote contains mescaline like Huachuma, the plants and ceremonial containers do have subtle differences. The stories and other associated spirits between each plant are unique, which influences the experience.

Be it plant spirits or set and setting, the two cacti create different effects for every person. Both contain more active alkaloids than mescaline, which could contribute to differences in how each plant works.

There are several different types of both San Pedro and peyote cacti, with breeders developing new varieties. Genetic variations and growing conditions make it impossible to know exactly how much mescaline is in a cactus. But, studies have established rough guidelines:

It is possible to cultivate both San Pedro and peyote, and indeed, many people do. San Pedro is by far the more common. Folks growing peyote generally do so for spiritual reasons.

San Pedro cactus is a legal and surprisingly common ornamental plant in many areas of the world. San Pedro can grow rapidly, at half a meter per year, in the right conditions.

In most countries, the harvest and consumption of San Pedro are Illegal. Check out our article about where are San Pedro cactus legal for more details.

It is illegal to cultivate peyote cacti in the United States. Peyote is extremely slow growing and requires special conditions. The plant can take a long time to flower and become large enough for consumption. Peyote is a sacred plant to many, so cultivation does happen.

Huachuma vs Peyote – Which One Is Best for You?

Because of the availability, legality, and ease of cultivation of San Pedro, this is what we recommend if you have an interest in working with mescaline-containing cacti.

In South America and some parts of Europe, San Pedro ceremonies occur that are in legal and safe settings. There are also many underground practitioners.

Peyote is a rare plant and is illegal to harvest and consume. However, if you are Native American or have a spiritual connection to the ancestral traditions of North America, peyote can be a beautiful and healing experience. Joining the Native American Church can grant legal access to peyote in a safe setting led by experienced elders.

Both cacti deserve immense respect, as mescaline is a powerful psychedelic. Likewise, these cacti are some of the longest spiritual traditions practiced today.

Finding trusted, skilled and safe facilitators and retreat settings are essential to working with either medicine.