Home » Psilocybin » Quit Smoking with Mushrooms? Is it even possible? 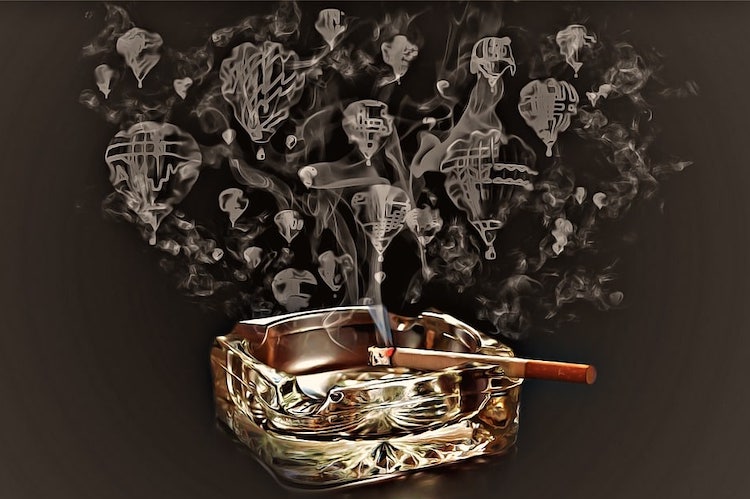 Quit Smoking with Mushrooms? Is it even possible?

Wait, did you think you could quit smoking with mushrooms from your local grocery store?  No, we are talking about the potential of psilocybin, the psychoactive substance found in a variety of psychedelic or magic mushrooms

Every year, cigarette smoking is estimated to add nearly 600,000 new smokers under the age of 18 in the United States, and contributes to over 480,000 deaths overall. Despite decades of research and public health measures strongly encouraging the public to quit, for more than 40 million Americans, this goal remains elusive, the point at which rationality and addiction intersect. Today a wide range of smoking cessation aids are available, often without a prescription. These are designed to help a smoker gradually reduce or migrate away from tobacco to less physically-harmful forms of nicotine delivery. But relapse rates are high, and the combination of the powerful addictive nature of nicotine and the comfort of the physical act of smoking is difficult to replicate. For long-time smokers struggling to quit, a new solution is emerging – and perhaps even better, it’s all natural, without serious side effects and without relying on continued administration of nicotine. Groovy.

Psilocybin, the ‘magic’ psychedelic compound found in dozens of varieties of naturally-growing mushrooms, is increasingly looking like a singular opportunity for smokers that have been unable to shake their habit through more traditional means. At research institutions across the US, perhaps most notably the Johns Hopkins School of Medicine, research has been under way for much of the last 10 years to study the efficacy of psilocybin treatments in the cessation of smoking. A groundbreaking and oft-cited 2014 study administered psilocybin across 3 guided sessions to a small group of long-time smokers (whose efforts to quit had never been successful). After 6 months, 12 of the 15 participants  had not only quit smoking – a success rate previously unheard of – they reported no interest in ever smoking again, suggesting that psilocybin does not present a new treatment for smoking, but rather, possibly, a cure. More recent studies with expanded subject counts have shown something closer to a 50% success rate, but even this lower rate compares very favourably to the most effective legal treatments currently available, which top out at just 35%.

In most studies, patients are recruited for participation and then screened rigorously for their eligibility (primarily to ensure that the patient exhibits none of the warning signs for psychosis, which can occasionally be triggered by the ingestion of psilocybin). Once admitted to the trial, the volunteers are brought to a clinical setting reminiscent of a psychiatrist’s office, complete with comfy sofa, mood lighting, blankets and quiet, calming music. Trained psychiatric professionals are on hand to walk the subject through their experience, which typically lasts 5-6 hours from the time that they take their dose. The subject will lay down on the couch and get comfortable for the long experience that awaits them.

The results of psilocybin – a patient’s experience

The effects of the drug are felt quite quickly, typically within just 20-30 minutes. From that point on, the experience is pretty unique; patients report a huge range of outcomes, from elating and fascinating, to pretty terrifying. “I swear that the desk lamp in the room turned into a fire-breathing dragon and was beckoning me to follow it” reports Margaret (not her real name), a FrshMinds.com reader and trial participant. “It wasn’t necessarily scary at first, but when it tried to leave the room and I guess I wasn’t following behind, it turned to me and started acting aggressively. And then it just sort of dissipated and I was on to the next thing. I’m sure I was screaming!” This type of experience is not uncommon, and the resident therapist helped Margaret through her trip. “I vaguely remember her holding my hand, adjusting my pillow, reminding me in a very soft tone that this was all part of the treatment, scary but not real, and so on. It was helpful for sure, I wasn’t exactly able to focus on her voice, but I knew that it was speaking truth, so it definitely calmed me down.” The vivid nature of the experience is unsettling for many first-time recipients, who report thinking they’re “going crazy”. But as she started to emerge from her session, she was struck by the realization that, despite being a pack-a-day smoker coming into the session and having spent over 7 hours in the facility, she had no immediate craving. “I didn’t remember the last time I DIDN’T have that craving, to be honest. It was maybe the most unsettling part of the day.” And as day turned to week turned to month, she experienced no relapse whatsoever. Now, 2 years after her third and final session, Margaret continues to preach the power of psilocybin. “Honestly, I feel like it saved my life. My whole body feels different – I have more energy; I look at myself in the mirror and I just look healthy. I’m so thankful.” The growing body of research is strongly suggesting that those patients that experienced the most vivid and visceral trips also reported having the greatest degree of success. Evidently, the degree of the trip is reflective of the degree to which the patients’ synapses are firing, with the brain’s neural pathways being permanently re-organized. During the session, the patient is encouraged to accept everything they experience and absorb it as much as possible. “Throughout the session, my therapist just kept saying ‘it’s not real, just go with it, it’s ok, you’re in a safe place, etc’ and, particularly in my last 2 sessions, I really tried to keep myself open. I guess it worked.”

Receiving psilocybin treatments in a clinic

While psilocybin treatments are not for everybody, the screening procedures being used in the clinical trials and the in-treatment support from the trained therapist are enough to eliminate any significant risks. Presuming the patient is not pre-disposed for psychosis, the only other major risk factor is the patient’s accidentally hurting themselves. These risks are modulated by a careful consideration of the appropriate dosage and patient preparation. “I was speaking with the therapist that was in the session with me for 3 weeks beforehand; we were getting comfortable with eachother and I think she was probing for any landmines she might have to step through! I’m glad that we did it, because if I didn’t have a sense of trust for her, I might have really freaked during the session. She was a safe harbor in the storm.”

While psilocybin treatments are not yet legal in the United States, emerging legislation is set to change that status by 2023. And if the broad impact is similar to the early test results, perhaps millions of suffering and addicted Americans will be able to move forward with a healthier life, potentially saving the healthcare system a significant portion of the $300 billion spent on smoking-related issues annually. The path forward, for Margaret and millions like her, is clear.