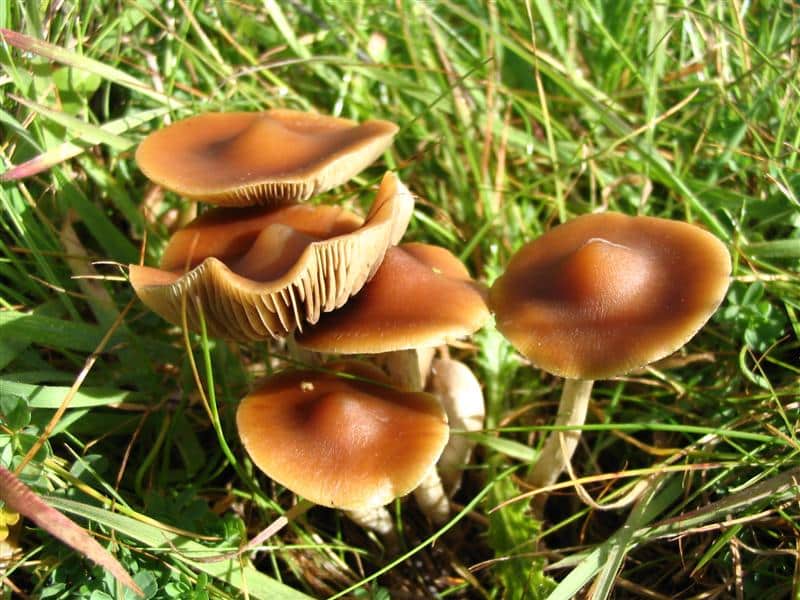 Psilocybe subaeruginosa magic mushrooms were first described in 1927 by Australian mycologist John Burton Cleland. They get their species name from the feminine Latin adjective aeruginosa, which describes copper rust and is the same colour of the blueing reaction when the mushrooms are damaged or handled. Psilocybin concentrations have been reported to be 0.45%, or between 0.06% to 1.93%.

Psilocybe subaeruginosa magic mushrooms grow solitary to gregariously in grassy fields and Eucalyptus forests, and is occasionally seen on dung. This species is common in southern parts of Australia from April to August.

The cap is conical to conic-convex with slightly inrolled edges when young, and becomes convex with maturity. Coloured yellow to orange-brown and paler towards the edge.

Gills are spaced moderatley close, attached to the stem, and pale smoky brown when young, becoming violet-brown with narrow pale edges upon sporulation

Stem is tall, slender, hollow and may be slightly wider towards the cap. The base is also slightly enlarged or may become a mass of mycelium. Colour is pale whitish streaked with dark greyish brown and a white, fleeting partial veil leaves traces as a raised area around the upper stipe.