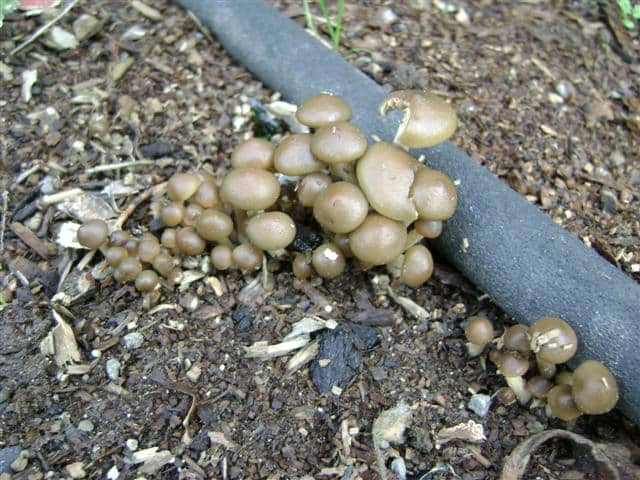 Psilocybe stuntzii magic mushrooms were named after American mycologist Daniel Stuntz of the University of Washington, where this species was originally identified growing on the campus. There have been several poisonings attributed to collectors consuming the highly toxic Galernia marginata after mistaking them for Psilocybe stuntzii.

Psilocybe stuntzii magic mushrooms grow scattered, gregariously, or in tufts (rarely solitary) in coniferous wood chips and bark mulch, soils rich in woody debris, and in newly mulched lawns/gardens throughout the western region of the Pacific Northwest. This mushroom used to appear in over 40% of all new lawns and mulched areas in the Puget Sound region of the Pacific Northwest, however due to a disappearance of pastures south of Seattle, this mushroom now only appears sporadically in certain new, well-fertilized, an manicured lawns. This species appears from late July through December and can be observed all year long in the Seattle area. It has also appeared in California, rarely as far south as Santa Cruz.

The cap is conic to convex when young, expanding to convex-umbonate or flat with uplifted edges upon maturity. It's a dark chestnut brown colour and lighter towards the center, may be olive-greenish tones at times, and fades to a pale yellow or yellowish brown.

Gills vary in attachment from attached, to attached in a hooked manner (sinuate), to reaching the stem but do not attach. They are closely spaced and moderately broad. Color is yellowish brown at first, turning violet/chocolate brown to blackish violet with white edges upon sporulation. May be somewhat mottled.

Stem is cylindrical to slightly cylindrical, and may be slightly enlarged at the base. It can be twisted at times, is flexible, slightly fibrillose, and originally stuffed with spongey white tissue, becoming hollow. Colour is white to ochraceous or brownish fibrillose, and the partial veil is thinly membranous, leaving a fragile annulus that becomes more noticeable as it darkens with spores. It stains blue-green when injured, most noticeably on the ring.