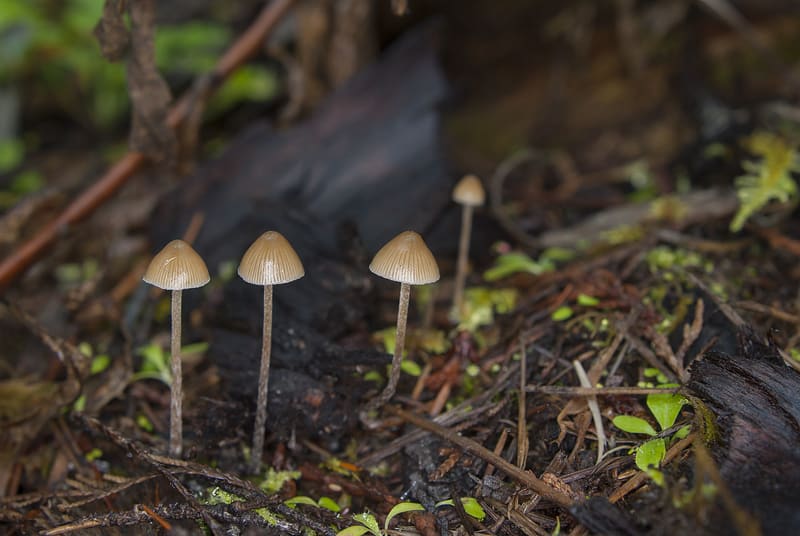 Psilocybe pelliculosa magic mushrooms get their name from the Latin pellicula (film), referring to the gelatinous film of the cap. This species was first described in 1937 by American mycologist Alexander H. Smith as Psathyra pelliculosa based on specimens collected in November 1935. In a 1941 publication, Smith considered the species to be the same as Hypholoma silvatica (later Psilocybe silvatica). However, after reevaluating these two species, Rolf Singer and Smith later reestablished the taxon and transferred it to Psilocybe in 1958. American mycologist Paul Stamets considers this species to have relatively weak potency, with reported psilocybin levels ranging from 1.2-1.7 mg/g of dried mushroom and baeocystin levels at 0.04%. Some reports from the 1960s claim the fungus does not produce psilocybin when cultivated in the laboratory.

Psilocybe pelliculosa magic mushrooms were first discovered near Tahkenitch Lake, Oregon and can be found throughout the Pacific Northwest in California, Idaho, Oregon, Washington, and British Columbia. A single collection from Finland has also been reported. This species fruits late summer to early winter after cool, wet weather in groups or clusters on moss, forest debris, and humus in coniferous forests on trails and abandoned forest roads with alders and firs. It's not commonly found in grasslands.

The cap is sharply conic and expands to broadly bell-shaped upon maturity. Cap edge can have a greenish-grey tinge and is initially pressed against the stem and has partial veil fragments hanging from it. Mature caps are sticky and range in colour from umber to yellow-grey when the mushroom is moist, to pinkish-buff when dry. The outer layer of tissue is a thin gelatinous film that can be peeled off.

The gills are attached to the stem and eventually separate, are narrow to moderately broad, and are closely spaced. When young, gills are cinnamon-brown with lighter edges, but darken with sporulation

Stem is cylindrical with a slightly enlarged base, which is brownish in color and has silky hairs pressed against it. The upper region is grayish and lightly dusted with powdery white granules. Bruises blue/green when injured.