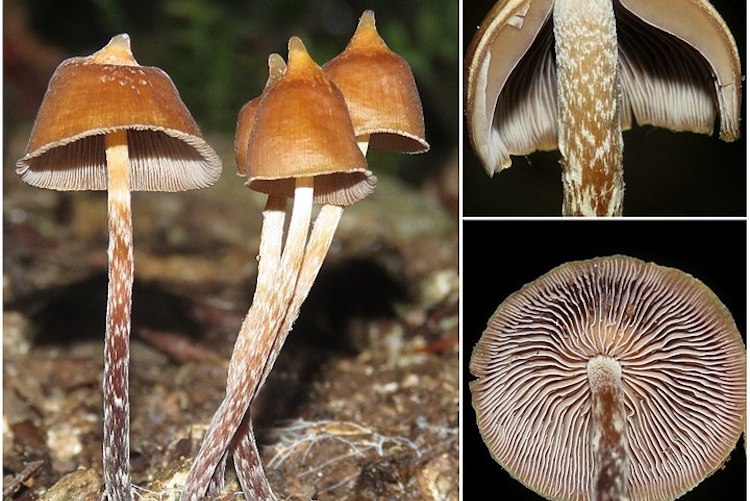 Psilocybe hoogshagenii magic mushrooms were first described by French mycologist Roger Heim in 1958, and is one of the species depicted, though mislabeled as Psilocybe zaptecorum, in the 1957 Life magazine photo essay “Seeking the Magic Mushroom” in which R. Gordon Wasson described the psychedelic effects he experienced during rituals of the Mixtec people, and introduced psilocybin mushrooms to the West. This species is named after American anthropologist Searle Hoogshagen, who helped Heim and Wasson search for psilocybin mushrooms. American mycologist Paul Stamets reported 0.6% psilocybin and 0.1% psilocin in dried specimens, whereas chemical analysis of P. hoogshagenii specimens from Brazil yielded up to 0.3% psilocybin and 0.3% psilocin.

Psilocybe hoogshagenii magic mushrooms grow solitary or in small groups on humus or clay soils of subtropical coffee plantations. In Mexico, it fruits in June and July, and in Argentina it fruits in February. This species has also been reported in Brazil and Colombia.

The cap shape varies from conical to bell-shaped to convex, and has a sharp central bump (umbo). Colour varies from reddish to orangish brown to yellowish.

The gills are broadly attached to the stem or reach the stem but do not attach. They are brown, becoming purplish-black with sporulation.

Stem is twisted, hollow, and more or less cylindrical, with potential swelling at the base. It is yellowish and forms a soon disappearing and fragile partial veil.