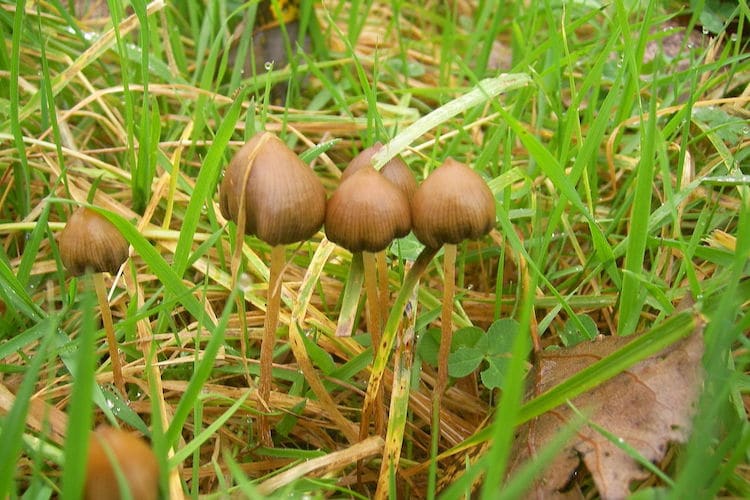 This guide will help assist you with psilocybe semilanceata identification. Psilocybe semilanceata, also known as the “Liberty Cap”, is one of the most common and easily foraged mushrooms in the world. Due to its adoration of naturally fertilized, damp fields, lawns and pastures, this potent mushroom can be found in many parts of the world, sometimes in your own backyard.

Mushroom hunting is no joke, especially in regards to psilocybe semilanceata identification. Many varieties of mushrooms are poisonous and eating just a single one of the wrong type can kill you. The most common mistake leading to a mushroom mishap owes to misidentification. With this in mind, let’s take a moment for this public service announcement…

Disclaimer: The information posted on this site is not meant to serve as a field guide and/or replace expert knowledge as many mushrooms are poisonous, some are deadly poisonous, and is purely informational.  The responsibility for eating any mushroom or fungus must rest with the individual.  If you plan to collect fungi to be eaten, misidentified mushrooms can make you sick or kill you. Do not eat mushrooms you are not 100% certain of.  Frshminds takes no responsibility for damage caused by wrong identifications. If you continue, you agree to view this website under these terms.

Put on Your Liberty Cap Before You Go Foraging

Before you go skipping off into the nearest wet field with surgical forceps and scalpel to do your psilocybe semilanceata identification, get to know what you’re looking for first. Even though psilocybe semilanceata is quite common and can be found with ease, don’t rush doom with your mushroom. As noted above, mushroom collecting in worst case scenarios can lead to death. Then your body grows mushrooms, which isn’t as much of a joke as you think.

Anyways, click over to Frshminds’ guide to the basics of psilocybe semilanceata/liberty cap. If you don’t know the basic profile of the Liberty Cap, you’ll be out in the field like a complete dick looking for a suspect without a police sketch. Knowledge is everything, especially when it comes to mushroom foraging.

The etymology of semilanceata comes from the Latin word for “spear,” like a lance. Of course “semi” means half, so in the end, the species name refers to half a spear, due to its thin stalk and pointy cap. Before you plan on spearing blue cheese olives in your next martini with them, know a few things beforehand.

First, you won’t be able to swizzle your martini with them because the stalk is only as strong as a half cooked spaghetti strand. Secondly, they’re one of the easiest species to misidentify, with plenty of impostors lurking in the grassy, mushroom regions of the world. Being well informed and identifying a Liberty Cap with 100% accuracy will do away with any fear of picking the wrong one and getting poisoned. With this in mind, let’s discuss the 5 main features of psilocybe semilanceata to help you on your foraging endeavors: cap, gills, stem, spores, and veil.

How to Cap that Grass

Perhaps the most distinctive feature of the Liberty Cap is its cap, or head of the mushroom. Psilocybe semilanceata has a conical shaped cap. Atop the bell-shaped cap appears a “pimple” or what’s known as an umbo. To be honest, the umbo has a distinct and prominent look of a nipple. Yes, go ahead and call it a “booby cap.”

The caps range in diameter from 0.5 cm to 2 cm. The cap’s color starts out cream-colored or a rich taupe. However, of the course of its lifecycle, the cap color changes, due to moisture fluctuations. The psilocybe semilanceata is hygrophanous, meaning the color changes pursuant to its environment’s moisture levels. When the cap is moist it ranges from “…pale brown to dark chestnut brown, but darker in the center, often with a greenish-blue tinge.”

When not in moisture rich settings, when the cap often looks pale brown it changes color. In drier habitats the caps turn a chestnut brown color, with the center turning darker brown. As the mushroom matures the taupe color fades into a grayish brown. When the caps dry out they pale more and transition to a yellowish-brownish color. If the caps get bruised, they turn bluish-greenish much like your own flesh.

The shape of the cap remains mostly the same throughout the mushroom’s lifetime except for one thing- the cap margin (edge). Younger mushrooms will display an edge that’s curled inward, underneath the cap. As the mushroom ages, the cap margin will flatten out, and sometimes even roll upward.

Speaking of rolling up, you might also be able to do the same with another Liberty Cap mushroom feature. Psilocybe semilanceata caps possess a removable, glutinous layer called a pellicle. The gelatinous film is seen when the mushroom cap is peeled back or broken. For this reason, wet Liberty Caps can be sticky. With increased sun exposure, the film turns a whitish color and can no longer be peeled off.

Another easy to identify feature of psilocybe semilanceata is its striations on the cap. When thriving in a moist environment the caps display distinctive radial grooves which correspond to the gills underneath the cap. With age, the striations get more pronounced, as well as in dry weather. As the mushroom dries out, the striations disappear, making dry Liberty Caps harder to distinguish between dangerous impostors.

Finally, one last distinctive feature helps to identify psilocybe semilanceata. During sporulation the cap margins get stained dark as the result of released spores. The dark stained cap margins provide one of the easiest ways to identify Liberty Caps.

Avoid Getting Green Around the Gills

Knowing how to identify the gills on psilocybe semilanceata also helps to avoid picking a poisonous look alike. Below the cap, each mushroom has “15-27 narrow and moderately spaced gills.” It’s common for the gills to crowd together a bit. Each gill attaches to the stem in a free and independent manner. The delicate gills also attach to the cap with a light touch. Cystidia will appear on the gills.

In the mushroom’s early phases the gills can appear as anything as olive gray to pale brown to pale creamy gray. As the Liberty Cap matures the gills change in color. The pale color fades, as the spores mature, turning the mushroom into a dark purple-brown color.

Where Liberty Caps Stem From

Psilocybe semilanceata stalks are delicate and wavy. Think half cooked spaghetti strands on your dinner plate, but shorter. The slender stems only reach between 2 to 3 mm in diameter. They’re also long compared to the cap size.

The fibrous stem, which has more thickness at the base, can reach between 4 to 10 cm or 1 3/4″ and 5 1/2″ in height. The slender stem can range from cream colored to yellowish-brownish and sometimes displays blue coloring near the base.

Psilocybe semilanceata spores are smooth and ellipsoidal in shape, measuring between 11.5-14.5 x 7-9μm. The spores bear a common purple-brown color, varying in darkness. They can also be reddish at times. From a frontal view, the spores look oblong to oval, and from a side view, appear oblong.

Lifting the Veil on the Liberty Cap

This thin, membrane-like veil is similar to a cobweb and often shares the same color as the surface tissue. However, this temporary veil disappears during the mushroom’s maturation as the veil doesn’t last long before its disappearance. After the veil disintegrates it leaves an area on the stem, where it was attached, that darkens with age. This area is called the “annular zone.” The annular zone may get darker with spore exposure.

Psilocybe semilanceata has an earthy and strong flavor. The mushroom is also described as having a farinaceous quality, meaning it tastes like starch. For this reason, some people also describe the floury flavor of Liberty Caps.

Don’t be surprised if you “taste the rainbow.” One of the more intriguing aspects of psychedelics is the phenomenon known as “synesthesia.” Synesthesia involves the mixing up of the senses, like “hearing colors” and “seeing sounds.” So if you eat enough Liberty Caps that you taste a rainbow, don’t freak out. This is a great sign that you’re locked into a great journey. Just be sure you don’t actually have a handful of Skittles that you’re munching on.

The Smell of Liberty

Much like the taste, a Liberty Cap smells earthy, strong and musty. It also often will have a farinaceous scent and can smell like a flour bag.

Now that you’ve got the basics, and then some, covered on the identification of psilocybe semilanceata, here’s a well done video to round out your learning. This complete guide to identifying Liberty Cap mushrooms will have you completely ready for your in-field pursuits.

Other mushroom species often are mixed up with psilocybe semilanceata. Some of the other common impostors are: psilocybe fimetaria, psilocybe liniformans, conocybe apala, psilocybe strictipes, pholiotina rugosa, protostropharia semiglobata, panaeolus semiovatus (Dung Rounhead), and panaeolina foenisecii ( Lawn Mower’s Mushroom or Brown Mottlegill). This article does a quality job of explaining what to be cautious of when distinguishing between psilocybe semilanceata and its doppelgangers.

Always remember that psilocybe semilanceata will never be found growing directly on dung. It is often found growing near dung-rich fields and pastures, but will not call a dung heap home.

If you’re still anxious about psilocybe semilanceata identification in the wild, don’t worry, we’ve got you covered, especially if you prefer watching to reading. The video below does a fine job helping you to distinguish between Liberty Caps and lookalikes.

Give Me Liberty or Give me (Ego) Death

Ok, ok, it’s doubtful that when Patrick Henry exclaimed these famous words, he had ingesting a head full of psychedelic mushrooms in mind. However, there is a definite link between some forms of liberty and ego death. If you happen to eat enough Liberty Caps, you may experience ego death and free yourself of numerous types of mental shackles and confining perspectives. Consider this type of potent journey like escaping The Matrix, or getting out of Plato’s Cave. Here’s to safe, successful Liberty Cap identification and seeing the light.

While I am originally from Chicago, I call Austin, TX home (which coincidentally led me to my first Ayahuasca retreat) with stops along the way in places like the everglade state of Florida and Spain. An active participant in the psychedelic community, I've had the privilege and opportunity to hear a range of expert speakers speakers, including Anthony Bossis, Jamie Wheal, Dennis McKenna and Roland Griffiths. In my spare time I hike national parks, enjoy abusing my passport, listen to the Flaming Lips and read Joseph Campbell, Jung, Graham Hancock, Alan Watts and Montaigne. As my beloved Bill Hicks said, “It’s just a ride."