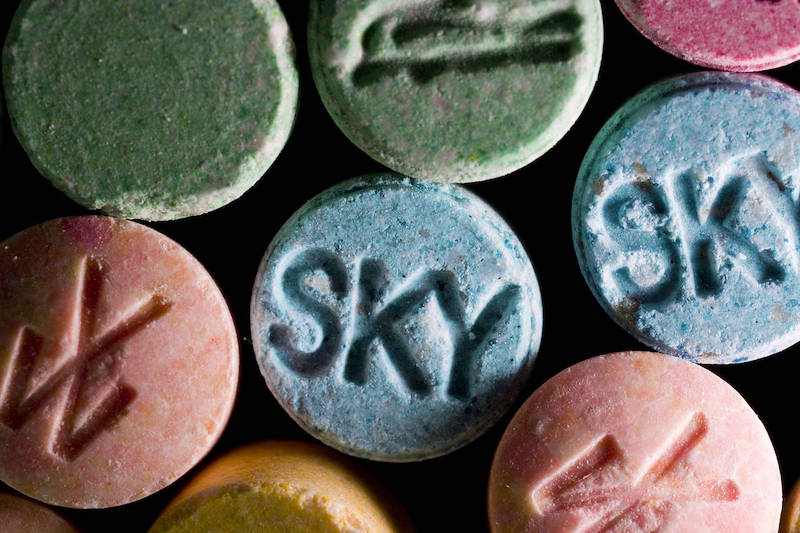 First synthesized in 1912, it was not until the early 1970s that MDMA Assisted Psychotherapy for PTSD was investigated. While reports described the potential for MDMA to facilitate communication and connection between therapists and patients, the 80’s saw the recreational use of MDMA became popular, leading to its classification as a Schedule 1 controlled substance in 1985, and thus created barriers for research and therapy. Recently, there has been a groundswell of attitude change towards the therapeutic potential of MDMA.

The article below is part of Frshmind’s “Psychedelic Science Snapshot Series” where Frshminds reviews the latest in psychedelic research.

Posttraumatic stress disorder (PTSD) can develop after exposure to a traumatic event, and results in symptoms such as intrusive thoughts and memories, negative effects on cognition and mood, hyperarousal and reactivity, and avoidance (Koenen et al. 2017). This debilitating disorder is estimated to affect nearly 4% of individuals globally, and over 8% in the USA at some point in their lifetime (Kilpatrick et al. 2013; Koenen et al. 2017). Further detrimental effects of PTSD include reduction in quality of life and relationships, disability resulting in obesity (Scott et al. 2008), hypertension (Kibler et al. 2009), comorbid mental health conditions, suicidality (Dorrington et al. 2014; Tarrier and Gregg 2004), and a substantial economic toll through lost productivity and treatment costs (Marshall et al. 2000).

Recently, trauma-focused psychotherapies have been identified as first-line treatments for PTSD (Lee et al. 2016). However, these therapies may be difficult to access and are ineffective for many (Koenen et al. 2017; Steenkamp et al. 2015). Aside from psychotherapy, medications have also been used in the treatment of PTSD symptoms, though only two drugs—sertraline and paroxetine—are approved by the FDA for PTSD and an estimated 40–60% of patients do not respond adequately to current pharmacotherapies (Bradley et al. 2005; Brady et al. 2000; Steenkamp et al. 2015). Further criticisms of these treatments include the potential negative side effects and the long-term use required to maintain effectiveness (Lee et al. 2016).

History of MDMA and Psychotherapy

Though first synthesized in 1912, it was not until the early 1970s that 3,4-methylenedioxymethamphetamine (MDMA) was used with psychotherapy. Case reports described the potential for MDMA to catalyze psychotherapeutic processes by facilitating communication and connection between therapists and patients (Nichols 1986). During the 80’s, the recreational use of “ecstasy” tablets potentially containing MDMA became popular which led to its classification as a Schedule 1 controlled substance in 1985, and thus created barriers for research and therapy. The non-profit organization, the Multidisciplinary Association for Psychedelic Studies (MAPS), was motivated to undergo the 3 phase FDA drug development process to study the safety and efficacy of MDMA as an adjunct to psychotherapy for PTSD and filed a Drug Master File (DMF) application in 1986, followed by an Investigational New Drug (IND) application in 2001 (Greer and Tolbert 1986; Grof 2001; Mithoefer 2011, 2017; Mithoefer et al. 2018). The purpose of this study was to assess data from six phase 2 trials of MDMA-assisted psychotherapy for PTSD in order to optimize the phase 3 studies.

After nonclinical toxicity studies and the phase 1 study of MDMA were completed (Frith et al. 1987; Grob et al. 1996, 1998), six phase 2 trials of MDMA-assisted psychotherapy for treatment of PTSD were conducted from 2004 to 2017 at five sites located in the USA (3), Canada (1), Switzerland (1), and Israel (1). Individuals aged 18 and older with previous inadequate response to at least one pharmacotherapy and/or psychotherapy for PTSD were recruited through internet advertisements, referrals by health professionals, and by word of mouth. The extensive screening procedures included reviewing medical and therapy records from outside providers, psychological assessments, physical examinations, laboratory testing,and ECG to identify any possible contraindications to receiving MDMA. If participants met criteria for past or current psychotic disorder or Bipolar Disorder 1, current borderline personality disorder, eating disorder with active purging, significant medical diagnoses (contraindications for MDMA), pregnancy or lactation, weight under 48 kg, and/or cardiovascular or cerebrovascular disease, they were excluded (except in one study where candidates with well-controlled hypertension and no other evidence of vascular disease could enroll after additional screening with nuclear stress test and carotid ultrasound). Participants also could not have a diagnosis of substance abuse disorders within 60 days of screening for five studies or within 6 months for one study, psychiatric medications were tapered and discontinued, and anxiolytics and sedative hypnotics were used as needed between experimental sessions. From the 488 participants that were telephone-screened, 105 were enrolled, with the sample having an average age of 40.5, a majority of white/Caucasian participants (87.6%), and being nearly sex balanced (females 58.1%). On average, participants suffered from PTSD for 215.3 months due to trauma from various causes and many had a lifetime history of positive suicidal ideation (86.8%) and/or behavior (30.9%).

Following screening and enrollment, participants were randomized to receive blinded doses of placebo/control (0 mg placebo; 25 mg, 30 mg, or 40 mg MDMA) or active doses of MDMA (75 mg, 100 mg, or 125 mg MDMA), with doses based on tolerability and subjective effects reported in several prior phase 1 studies (Cami et al. 2000; de la Torre et al. 2000; Grob et al. 1998; Harris et al. 2002; Liechti et al. 2001). Prior to the first experimental session, participants underwent two to three non-drug 90-minute therapy sessions which took place in a designated area that contained a futon or sofa, as well as aesthetically pleasing artwork and/or objects and were supported by a male and female therapy team (Mithoefer et al. 2011, 2018). The same male/female therapy team was present for all therapy sessions for a given participant and there were 18 therapy teams in total. After these sessions, doses were administered during two 8-h psychotherapy sessions spaced 3–5 weeks apart, with the therapeutic model described in the Treatment Manual being based upon initial work with classic psychedelics (Grof 2001; Mithoefer 2017) and early reports of MDMA in a therapeutic setting (Greer and Tolbert 1986). The method includes periods of introspection alternating with periods of communication between therapists and the participant, in which the participants could wear eye shades and listen to mostly instrumental music during the parts when they were focused inward. The aim is to allow participants to revisit traumatic experiences while staying emotionally engaged even during intense feelings of anxiety, pain, or grief and thus allow for processing of other psychological, interpersonal, or behavioral aspects of the participants’ lives that are likely to arise from trauma. 1.5-2.5 hours after the initial dose of MDMA, participants could discuss with the therapy team and if advisable, choose to receive another dose equal to half of the original. The dose was chosen to be received 90.9% of the time.

Assessments were administered at baseline and at follow-up visits occurring 1 to 2 months after the second and third experimental sessions and at additional time points in some studies.  The primary assessment of PTSD was the CAPS-IV, a semi-structured interview addressing PTSD symptom clusters (re-experiencing, avoidance, negative mood or cognition, and increased arousal) as recognized by DSM-IV (Blake et al. 1995; Nagy et al. 1993; Weathers et al. 2001).

The change in CAPS-IV total score from Baseline to after the second experimental session was significantly different between control and active groups, with the active group having the greatest estimated mean drop in scores (− 30.4) compared to the control group (− 10.5). Study, age, PTSD duration, sex, race, and prior “ecstasy” use did not predict outcome in this model. Notably, more participants in the active dose group (54.2%) no longer met PTSD diagnostic criteria compared to the control group (22.6%). The Beck Depression Inventory—II (BDI-II) is an established 21-item measure of self-reported depression symptoms (Beck et al. 1996), and was administered in four of the six studies as a secondary assessment. Depression symptom improvement on the BDI-II was greatest for the active dose group (− 12.4) versus control group (− 6.5), with the difference between groups trending toward significance. Due to the crossover, there is no between-group comparison for the post third session time point.

Safety was assessed by tracking the rates of spontaneously reported reactions (subset of adverse events) during experimental sessions and 7 days following. Treatment related adverse effects were recorded as well but not collected on the spontaneously reported reactions list, or were reactions that continued for 7 days or more after experimental sessions. The most frequently reported were anxiety, depressed mood, irritability, and panic attack. On the day of blinded experimental sessions, reactions reported by ≥ 40% of participants in either group were anxiety, dizziness, fatigue, headache, jaw clenching/tight jaw, lack of appetite, and nausea. The majority of expected reactions were rated mild or moderate, and the frequency of reports decreased over the 7 days following an experimental session. In specific studies, neurocognitive functioning was also monitored at baseline and 2-month follow-up using the Paced Auditory Serial Addition Task (PASAT) (Gronwall 1977) and Repeatable Battery for the Assessment of Neuropsychological Status (RBANS) (Randolph 1998). No changes in neurocognitive function were detected.

At every visit and twice during the 7 days of contact in four of the six studies, a structured interview addressing presence and intensity of suicidal ideation and behavior called the Columbia Suicide Severity Rating Scale (C-SSRS) (Posner et al. 2007, 2011) was conducted, and blood pressure and heart rate were measured in intervals of 15 to 30 min, and body temperature every 60 to 90 min during experimental sessions. During the treatment phase, suicidal ideation transiently increased in some participants and was more common in the active MDMA group, although the causal relationship to the psychotherapeutic processing of traumatic memories or to MDMA itself, or to random group differences could not be determined. Four serious adverse events were reported including one instance of suicidal ideation (30 mg) (Mithoefer et al. 2018) and one of suicidal behavior prior to MDMA exposure in the first experimental session, however there was no suicidal behavior during the treatment period after dosing.

As well, MDMA in the context of psychotherapy was found to have a low potential for abuse as there were no adverse events or treatment discontinuation related to “ecstasy” seeking or craving, and no reports of use outside the study through the post third session endpoint. In fact, many participants reported that the experimental sessions were not particularly pleasurable experiences, but rather difficult therapeutic work.

Overall, MDMA assisted psychotherapy for PTSD was safe and efficacious for civilians and veterans/first responders who had previously failed to respond to pharmacotherapies and/or psychotherapy. The reproducible findings attained by various therapy teams in participants with PTSD arising from different types of traumatic experiences demonstrate the applicability of the MAPS MDMA Therapy Training Program that’s based upon the MDMA-assisted Psychotherapy Treatment Manual (Mithoefer 2017) and were used to informed the design of two FDA approved phase 3 trials. Planned enrollment is 100 participants in each phase 3 trial, with 3 sessions total. This is due to it appearing that while many people respond adequately after two MDMA sessions, an additional session leads to more participants reaching clinically significant symptom reductions and greater drops in CAPS-IV scores. While phase 2 data showed that 75 mg MDMA produced significant improvement (Mithoefer et al. 2018), the sample only contained 7 participants and therefore the optimal dose is unknown. Fixed-dose regimens do not account for differences in body weight or individual variation in subjective effects of MDMA, and thus phase 3 trials from 15 sites in the USA, Canada, and Israel will employ a flexible dose regimen. Similar to these studies, participants will be randomized to receive inactive placebo or MDMA (80 mg), plus an optional half-dose. Participants can then have the choice to escalate the dose to 120 mg with optional supplemental dose (or stay at 80 mg) in the next two sessions. The control group receives the same treatment minus the MDMA. In these 6 studies, participants and therapists were predominantly White/Caucasian, thus phase 3 studies will evaluate the generalizability to individuals from more diverse ethnic and cultural backgrounds. Because vital sign increases did not reach clinically concerning ranges, the frequency of required vital measurements will be reduced in phase 3 trials to baseline, pre-supplemental dose, and session end. Since there was no evidence of cognitive impairment, neurocognitive measures will not be employed during phase 3. In 2017, the FDA designated MDMA as a Breakthrough Therapy and if findings are significant and no new safety concerns arise, MDMA could become an FDA-approved treatment for PTSD in the context of psychotherapy by 2022.