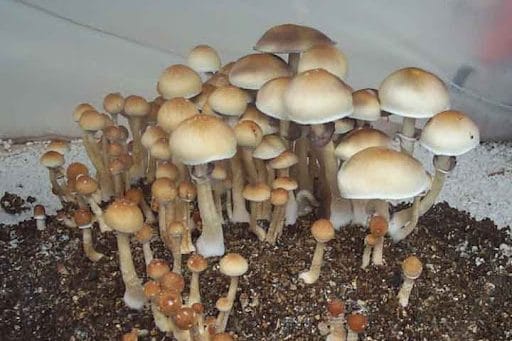 This strain is considered to be relatively quite potent, with consumers reporting intense visual effects and a spiritual or mystical state of consciousness. This magic mushroom strain was popularized by a man named Mr. G, a famous mycologist in the underground ‘shroom world.

Psilocybe Cubensis Gulf Coast Magic Mushroom stems are white, thickening towards their base, with caps that are off-brown and yellow-tinged; they are fairly pale. They often have a dark spot in the center of the cap.

It’s native habitat is off the gulf coast in Florida, where It was first found growing in bovine and equine dung and soils which were filled with nutrition. It is a wild growing cubensis that grows along ocean bordering states such as Texas, Alabama, Florida, Georgia, its spores easily travel through birds, farm animals and wind.

Caps range from yellowish to light brown in colouration, with smaller fruiting bodies.

White, curved and slender stems that thicken at the base; Stems often grow close to 20" inches in length in bigger substrates.