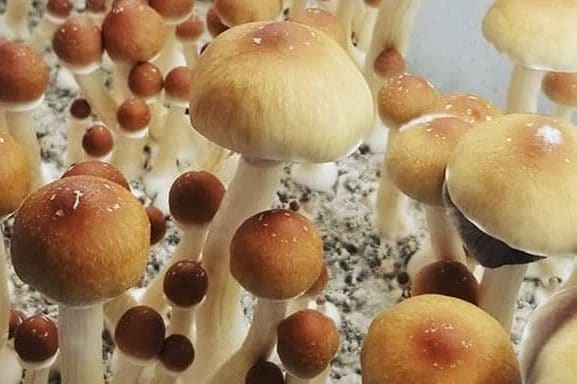 Alacabenzi Magic Mushrooms (Psilocybe Cubensis Alacabenzi) are theorized to be a cross between the golden teacher cubensis strain and Psilocybe mexicana or the mexican cubensis, and alabama cubensis. While mexican is known for its strength and spiritual aspects, alabama is known for its size. This strain was first catalogued in 2001 and heavily domesticated due to its resistance to contamination, prolific sporulation, and aggressive colonization.

The Alacabenzi shrooms are known for their shamanic properties very similar to its origins the Mexican cubensis.
Alacabenzi Cubensis are an ideal choice for novice users, who prefer practicing caution with a potent and intense hallucinogenic journey. Alacabenzi Magic Mushrooms are known to produce gigantic fruits in the wild, in commercial settings they produce beautiful, symmetrical and very consistent fruits.

It is said that this mushroom can deliver effects that are similar to the effects of strong cannabis edibles and is often recommended for first-time users to be at home while they experiment with finding their optimal dosage because of its ability to impact balance and cause a deep body stoned effect. Effects are mostly similar to other Cubensis strains, with Alacabenzis offering mild visuals, increased self-awareness, and intense euphoria.