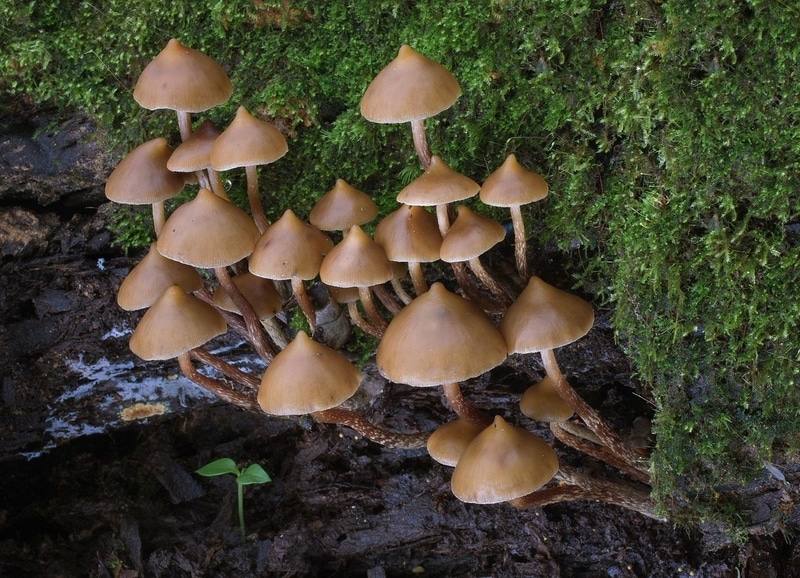 Psilocybe yungensis magic mushrooms were first described by American mycologists Rolf Singer and Alexander H. Smith in a 1958 Mycologia publication, followed by a more detailed description later that year. This species is used by the Mazatec for entheogenic purposes.

Psilocybe yungensis magic mushrooms grow in clusters, or less frequently solitary, on rotting wood from coffee plantations, subtropical, or cloud forests. The species occurs in northeast, central and southeastern Mexico, and has also been reported in Bolivia, Colombia, Ecuador, Martinique, and in 2009, China. In Mexico and Colombia, Psilocybe yungensis fruits between June and July whereas in Bolivia, it appears during January.

The cap is are conical to bell-shaped with a prominent central bump (umbo), sticky, and colour ranges from dark reddish to rusty to orangish-brown, and fades to a dull yellowish-brown

Gills are broadly to narrowly attached to the stem, closely spaced to crowded, and initially dull gray before becoming purplish-brown with sporulation

The stem is cylindrical though may be slightly enlarged at the base, hollow, brittle, pale brown on the upper part, and reddish-brown near the bottom. Covered with white pressed fibrils that disappear with maturity, as does the webby partial veil, which does not leave an annular zone