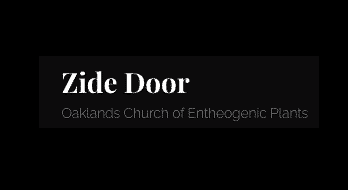 Zide Door is a Church in Oakland supporting the safe access and use of Entheogenic Plants. Our story begins a very long time ago when we were all omnivorous monkeys roaming the plains of Africa. One thing a hunter uses to find pray is their droppings. What grows out of their droppings in Africa happens to be Magic Mushrooms. Now, if you are a hungry monkey and you find these tasty looking mushrooms, what would you do? Probably try one. When you eat a small amount of Magic Mushrooms, you notice a few things, mainly enhanced vision and hearing. You now see every leaf that moves, every plant you might want to eat, and hear every sound an animal could make. This would be a significant advantage to any hunter. When you eat large amounts of these mushrooms, you see some amazing things that can only be described as spiritual visions. As a monkey who has just seen god, you would be compelled to try to explain what you saw to another monkey.

The Oakland Police Department raided the country’s most prominent psychedelic “church” and magic mushroom dispensary in August of 2020. Though the Oakland City Council voted to decriminalize hallucinogenic fungi possession and consumption last year, that policy doesn’t extend to sales. Prior to the bust Hodges received several warnings to shut down the operation, which their warrant described as an un-permitted cannabis dispensary. Its minister, Dave Hodges, told Vice News that armed cops busted into Zide Door Church of Entheogenic Plants on Aug. 13 and seized $200,000 in cash, cannabis and several strains of psychedelic mushrooms; no one was arrested.

While religion means different things to different people, the members of the Zide Door Church of Entheogenic Plants in Oakland commune with God through hallucinogenic mushrooms.

Dave Hodges leads the unconventional church, preaching in a pot leaf-patterned rob every Sunday at 4:20 p.m. Hodges elaborates on the teachings of Terence McKenna and shares spiritual experiences he’s had while taking up to 30 grams of mushrooms at once, 10 times a typical dose, and enough to make even the most fervent atheist see heavenly beings.

Going live on Instagram after the arrest, Hodges characterized the raid as a misuse of city resources and an infringement on his religious rights, referring to the 1993 Religious Freedom Restoration Act which grants protection to religious practices that include the use of plants or other herbs that induce psychedelic effects.